Study Trip to the Czech Republic

As one of our electives in the first semester, we’re able to chose to go on one of two study trips: Berlin or Prague. 14 of us decided to go to the Czech Republic to study Roma Representation. Personally, I haven’t learned much about the Roma people before, because as a group there isn’t much information or media coverage surrounding them or issues they face. This ended up being a common theme in our trip: lack of representation and invisibility in the Czech Republic, despite facing much racism and xenophobia by Czech people.

Prague is a beautiful city, and walking down the autumn streets with fallen leaves crunching beneath your feet, while breathing in the crisp air and smelling chimney cakes baking nearby, you’re bound to fall in love with the city. That’s when you start to feel this weird juxtaposition – this city you love, full of smiling tourists (because you won’t catch any Czech people smiling…) hides a dark reality. There’s a huge amount of racism and xenophobia in the Czech Republic, and studying the Roma community within this beautiful country brings to light a lot of these issues.

Our study trip started in Prague, the capital city of this small-ish country in Central (or Eastern, depending on who you ask) Europe. We all took our own transportation to Prague, some by bus, some by train, one by plane. We all met in the main train station (Hlavni Nadrazi) on Saturday afternoon and started our adventure by walking to our hostel through the city centre, as the sun started to slowly set. Our first day was full of exploring the streets, bumping into crowds of tourists, and eating as much as we possibly could.

On Sunday, we started off our Roma trip by going to the Museum of Romani Culture in Brno, Czech Republic. It’s a few hours away on a bus. Since 2005, it’s an official government museum, located in a majority Roma neighborhood in Brno. You can really feel the distance from this neighborhood to the main part of Brno – not because it’s actually physically far, because the neighborhood is only a 10 minute walk from the centre, but it still feels worlds away. Looking at the state of the streets, roads, the amount of dog shit on the sidewalk, as compared to other majority white neighborhoods, you start to get a sense of the deeper inequality within a normal-looking town in the Czech Republic.

The museum was really fascinating and gave us a general overview of Roma history, starting with theories of where the Roma people came from, and their beliefs. Walking through the main exhibit is like taking a chronological walk through history, up until modern day Czech Republic and the national anti-Roma sentiment found present in news, brutality against Roma people, and protests.

On Monday, we met with the Coordinator of Prague Shared & Divided, part of the  Multikulturni Centrum Praha (Prague Multicultural Centre). We spoke with him about different themes, such as democracy, history, nationalism, etc. Prague Shared & Divided is a project that leads walking tours around the city that focus on certain historical aspects, such as the visible and invisible remnants from Prague’s divided (and shared) history.  It was interesting to talk about the parallels between WWII and now, the role of free speech in nationalist tendencies, and the differences between education and activism.

After that, we did our own mini walking tour of Prague, where we stopped at different sites that were meaningful to our study trip, such as this monument: 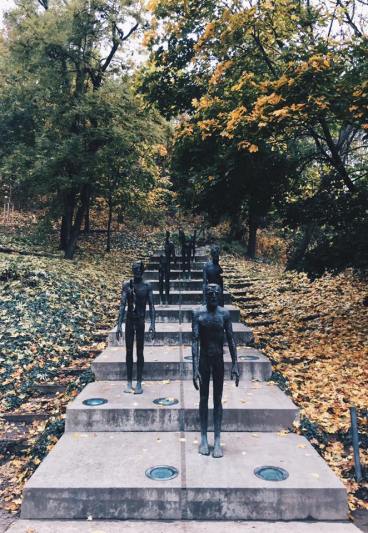 We also traveled to Cesky Krumlov, a historic town a few hours South of Prague. This super touristy spot also has a spotty past when it comes to the Roma. We spoke with people from a local NGO that aims as working with Roma youth to give kids a space for education and safety. We even spent time playing with them inside the NGO building, jumping on couches and having bean-bag fights. We really saw the child in a lot of our fellow master students!

That evening, we ate at a local restaurant, The Gypsy Tavern. A few of us were confused why we’d eat somewhere named with a racial slur typically used against Roma people. We actually learned that the owner is Roma and chose to name his restaurant that for marketing reasons! After a traditional Czech meal, we spent over an hour having a Q&A session with him and we really had a fascinating discussion.

There were a few really amazing speeches during the conference, and one that stuck out to me was by Martin, an 21- or 22-year-old Roma student who, despite all odds against him, is receiving an education, coaches basketball to young Czech boys, and works with different organizations to create events such as summer school for Roma high school students. Everyone in the audience was in tears at the end of his presentation!

After the conference, we spent one last night in a beautiful hotel in Ceske Budejovice and then headed back to Prague the next day. Now that the study trip was over, we could spend a few days in the city having a fun, touristy, time.

I won’t go into details about all our crazy antics of the next few days, but all I can do is recommend that you visit the bar Vzorkovna if you’re ever in Prague. It was a highlight of our free-time during the trip!